The back portions of the refrigerator are painted black for the scientific reason that, a color that is better at absorbing heat is also the color that is better at radiating heat. According to scientific theories, “The rate at which the body radiates or absorbs the thermal radiation will depend on the nature of the surface in which it operates”. The Objects that are good emitters of heat are also very good absorbers, according to Kirchhoff’s radiation law.

Table of Contents hide
Why is the back portion of the refrigerator painted black?
Bottom Line
More Relevant Guides:

Why is the back portion of the refrigerator painted black?

A black surface is both an excellent emitter and an excellent absorber. If the same surface is painted in silver or any other dull colors, then it becomes a poor absorber and a very poor emitter of heat.

Now that we know the condenser coils are letting out heat from the refrigeration process, the manufacturers ensure that they paint these external coils black to radiate heat as much as possible. This blackened surface will keep releasing the heat away from the refrigerator and ensures that the fridge will continue to work in an optimal condition, by remaining cool.

When the refrigerator is working, it will absorb the heat from the food and cool it down. It will dissipate heat through the condenser pipes at the rear of the refrigerator. Common sense tells us that black color absorbs more heat and will thus make the back portion of the refrigerator even hotter if it is painted in black. Still, the rear portion of these units is painted in black, for the simple reason that, the black color not only absorbs more heat, but it also dissipates it faster, maintaining easy release of hot air into the atmosphere. 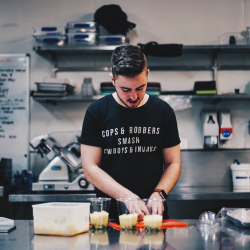 Hi, I'm Douglas Cassius, I have worked with many brands that manufacture freezers and refrigerators, so here I will be sharing that knowledge and helping HomeyCart readers.

HomeyCart.Com is a participant in the Amazon Services LLC Associates Program, an affiliate advertising program designed to provide a means for sites to earn advertising fees by advertising and linking to Amazon.com, Amazon.co.uk or Amazon.ca.